We didn’t mean to go to sea, and it is raining. I really like rain, and I have always liked it, it’s a good job really as I lived on a rainy green island until recently.

Today it is raining hard, with thunder and lightning, big rolling thunder. At sea it is possible to watch the storm rolling about on the waves. It is a spectacular sight. Weather has always both fascinated me and comforted me.  As a child I loved to sit in our conservatory, I think that was a posh name for a lean to on the back of our house with a corrugated plastic roof, or perhaps it was asbestos, either way I loved to sit there when it was raining, and even more so during a thunderstorm. It was a very small space, and the rain rained very, very loudly on it. I got so much pleasure from listening to the storms whilst watching the rain trickling down the windows in little rivulets or pouring off the sloping roof and spouting out over the paving outside. There was something so cosy about sitting in our conservatory. 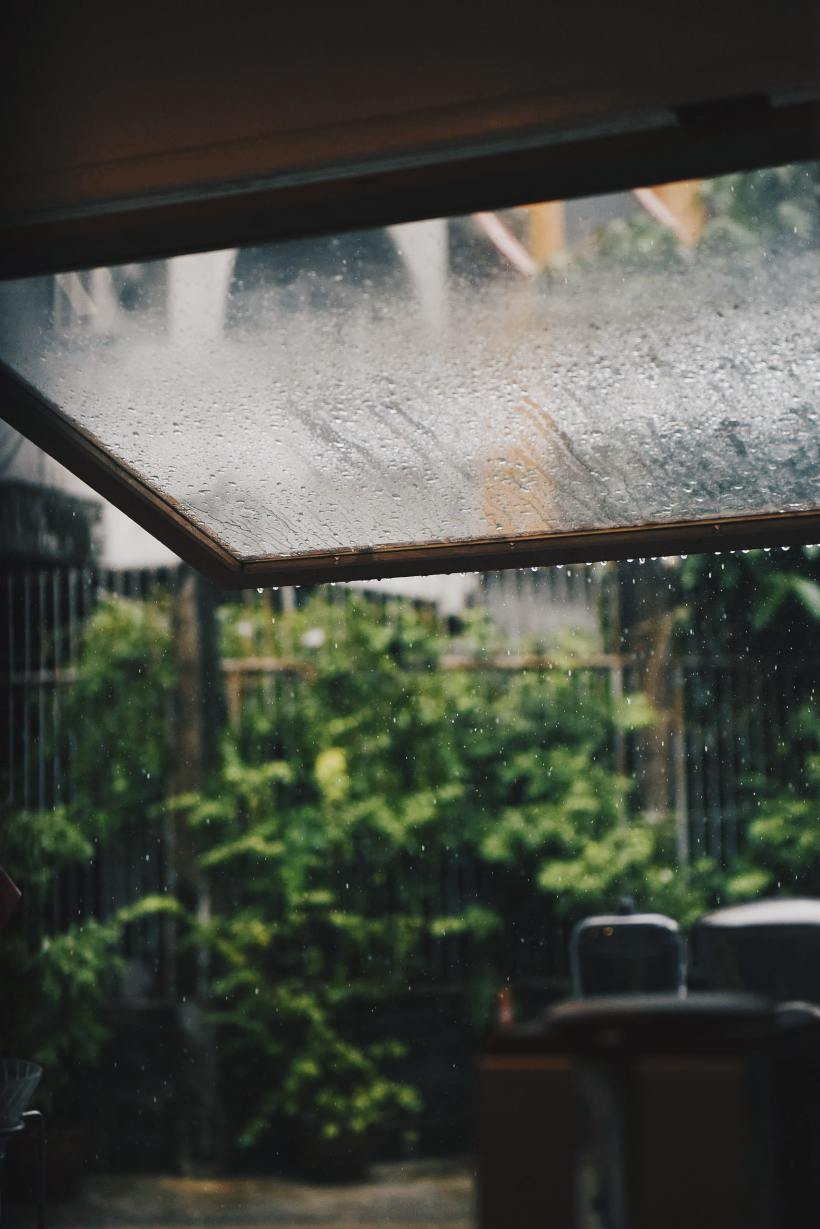 Heavy rain really has something about it, perhaps it is cleansing for the land and the heart. My childhood memories seem to be punctuated by thunderstorms and heavy downpours. I have a lot of memories of sitting in the back seats of the car, in those days when the seats were made of strange shiny faux leather that my bare legs stuck to on warm days, and I would have to peel them off slowly, painfully. I remember watching the windscreen wipers as they slowly hypnotised me with their back and forths, pushing huge swathes of rain from the windscreen and singing me their wump wump songs while my mum drove the car home from school. I really loved that time, the in-between time when I had escaped from the loud noises and bad smells of school and I was on the way home to my cosy house where I could watch a bit of TV and do what I liked without starchy old sour faced ladies ordering me to pull my socks up.

My dad once took us to a strawberry farm where we ate and ate and ate and occasionally put a few strawberries in our baskets. My dad didn’t care what we were doing, I think he was just happy that we were content and quiet; with our strawberry mouths full we couldn’t ask questions. I can remember his long legs in his tatty old jeans and him picking me up and running with me, and all of us laughing as the rain began to fall. We sat under the only tree in the huge strawberry field while the rain poured down and the thunder crashed, and I remember the conversation about whether it was safer to be under a tree in a thunderstorm or to be out in the open. I don’t know what the conclusion was but I liked watching the rain falling all around us while we ate all the remaining strawberries.

We often had adventures with our dad that ended in us getting either soaking wet or covered in mud (usually both) and being returned home completely unrecognisable, shoeless and exhausted. I think my dad must have loved the great outdoors, but he also hated noise, in particular the noise of three arguing children and his coping strategy was to take us on long walks through deep undergrowth and swamps. Perhaps he was trying to lose us. It was the 1980’s after all, the time when you could leave your children in the car outside the pub, with a packet of crisps and a bottle of coke, and go inside and have a few rounds with your mates before you drove the kids home.

We used to see how much fizz we could make in our coke bottles by blowing through the straws until they overflowed on our laps making the car even more sticky than it was already, which was quite sticky owing to the three children being transported in it. My sister and I also used to enjoy crunching our crisps up into a million tiny crumbs before we ate them.

My dad used to take us camping pretty much every weekend, all seasons, I often wondered if he was immune to the elements. We had very small tents and I had to share with my older sister, one morning I woke up and it was really cold, I opened the tent and crawled out into a foot of snow. My dad seemed oblivious. He made light of pretty much everything. I wonder why his laissez faire attitude didn’t really rub off on me. It would be handy.

My dad really was fantastically good at ignoring children, I have often wondered how he does it, I think perhaps he must be rather deaf, and choosing always to look elsewhere so that he can’t see the calamities about to happen. My dad had a big dark green leather sofa, he had it in the 1980’s when I was a little girl, and he still has it now (or perhaps my brother does). The cushions on this sofa could be piled on top of each other (there were three) and then you could climb up onto the back of the sofa and leap onto the pile, one or all of the cushions would shoot across the room, preferably with you on it, and my dad didn’t bat an eyelid. We used to play this particular game for hours and there didn’t seem to be anything that could avert my dad’s eyes from the athletics on the TV. This never ceased to amaze me as firstly there is no way I could sit in a room and either ignore or not join in with such antics, and secondly because athletics must be the single most boring thing that anyone could ever watch on TV. (Sorry athletics fanatics, but surely athletics is one of those things you need to actually be doing?).

When we visit my dad my children still play this fantastic game with his sofa, and my dad still ignores it, the sofa rather incredibly does not look a day older and is no worse for wear from this energetic game, which goes to show that my dad actually wins on the ignoring the manic game as no harm ever came out of it and at least ten children have played this game over the last forty five years. Perhaps my dad plays this game too when nobody is looking!

It is still raining, and I am currently wishing we had that sofa here on the ocean. We could try out sofa surfing, for real. It would probably sink.

I remember the first time I visited my sister in Australia, she lived in far Northern Queensland and it had not rained for nine years, until we turned up. Typical, I arrived in Australia ready for a lovely hot sunny holiday and somehow Australia picked that moment to empty nine years’ worth of rain over my sister’s lovely but very small house. Over the course of the next nine days it rained hard and continuously, there was of course nowhere for the five children to go except outside. After four days we had used up all the dry clothes and as my sister had no tumble drier (who does when it doesn’t rain for nine years?) we had no way to dry the clothes. On the seventh day the children were out in the paddock, three boys and two girls covered in mud swinging their wet clothes round and round trying to knock each other over. Well what else was there to do?

My sister had three giant water containers on her property that she occasionally had filled by a tanker, and over the nine days all three filled completely with the rain.  It was a happy time, we were even allowed to have a bath with a few inches of water in it to celebrate! It was such a strange contrast coming from such a wet Island to such a dry one.

I love Australia dearly, I love the light that makes everything look so magical and cheery. I love the wildlife with its funny wee pouches. I love the strange dry red barren desert. But I don’t think I would be happy living somewhere where water can be so scarce, I suppose it must be something one can get used to, but not out here on the ocean! Water, water everywhere, but not a drop to drink.