There are a few things I chose in my life that I think made fundamental differences, the one thing which I did a lot of when I was younger was moving. I once counted in my thirties how many times I had moved, I may have been cheating, (can I cheat if I make up the rules?) but by the time I was thirty I had moved more than forty five times. When I try to count now I can’t get near that number, I think I must have forgotten a lot of the moves I made. When counting I am mostly counting places where I lived in caravans and vans. I lived in vehicles on and off for about fifteen years. I thought that I would always want to.

There were a few things that I really loved about that way of life. Firstly I loved that I could live in the countryside and step out of my door into wildness. I loved that I could easily sleep under the stars when I felt like it, and when I didn’t want to sleep outside (which was often) I enjoyed that not having an indoor toilet meant that I frequently went outside at night. That  meant that I had a fuller relationship with the stars which I could see properly as I was living in the middle of nowhere with no light pollution.

At eighteen or nineteen I owned my own home. It was a 1967 JU250 Austin Camper van, some silly person had painted it black and red and it reminded me of a ladybird. It had about one square foot of floor space, an almost double bed, a gas cooker, a sink, and a very sweet wood burning stove. Although I lived in it for about a year, I only drove it a handful of times as I didn’t have a driving licence. Once I drove it into a stone wall, going around the corner too fast, and smashed a headlamp. I got out and had to rebuild the wall while a couple of old Irish men stood leaning on their tools watching me until I had finished, and then they went back to work.

The other time I remember driving it was as a test run after I had changed the brakes, I don’t remember the exact bit of work I had done, perhaps changing the shoes. It was in the days when one could work on a vehicle as it was all mechanical, you undid bolts and did them back up again, and if you were lucky when you had finished there were no bits left. I am sad that vehicles have been made in such a way now that you need specialist tools and knowledge to fix them. In any case I test drove my campervan down a hill towards the sea to see if the brakes were working. Whose was this utterly ridiculous idea anyway? They didn’t work. I hurtled towards the sea wondering at my very short career in mechanics, and my even shorter life as a van dweller in a classic vehicle. By some miracle at the bottom of the hill I managed to steer around the very sharp righthand bend skidding as I went into a big pile of rather conveniently placed gravel. I still have dreams that I am driving that van and I am standing up on the brakes and the van is not slowing down. 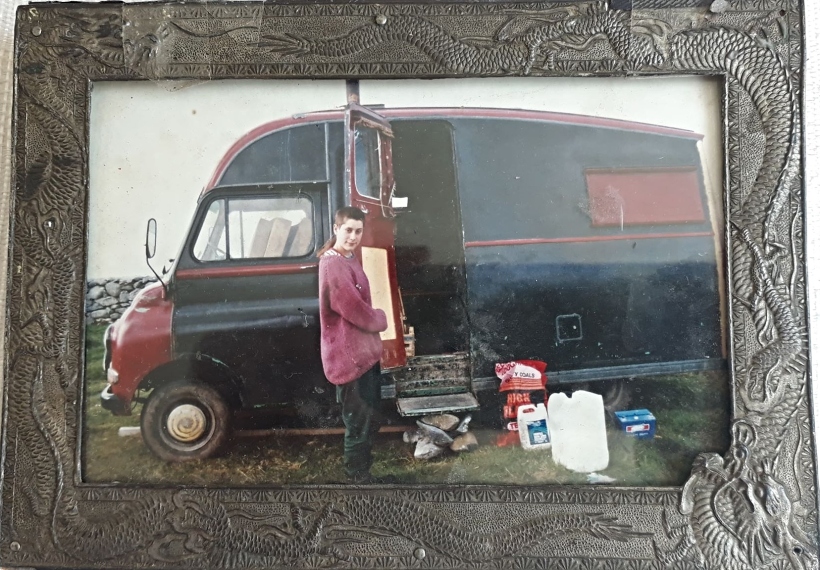 I miss the freedom of that way of life, of being able to just move because I felt like a change, or felt like exploring a new place. The reason for stopping living that way was mostly a financial one, with children it is hard to live like that unless you have money….

That was a huge tangent, what I was really going to say was that when I lived in my lovely classic campervan I lived in Ireland, first in county Galway, then in County Donegal. For some strange and unfathomable reason I decided to come back to England. Actually it was not that strange or unfathomable, I wanted to learn a trade. All my life I have fought doing the two things that make sense to me and make me happy: writing stories and songs, and playing music (ok that was three, or perhaps it was two, or maybe it was really only one?). So it was strange after all. Instead of following the things that I loved, I felt that they were not really what I ‘should’ be doing. Should is such an annoying word, somebody once said to me ‘stop shoulding all over yourself’. In terms of following my heart this shoulding went on for a very long time.

So I went back to England to learn a trade. I studied furniture making, and two things happened, firstly I made some beautiful furniture, annoyed some tutors and discovered that I hate making furniture. I had two very memorable teachers called Stan Ford and John Austen, John Austen once said that one had to measure to within a ‘gnats cock’. I do not wish to ever have to do anything that precise again. What is the second thing, you are asking, that is if you are paying any attention. The second thing that happened was that I found out not long after I started the course that I was going to have a baby. Everybody said I would not\should not (should off!!!) finish my course, and the odds were against me on a pretty much all male course, where I did receive some rather ignorant and unpleasant remarks from some young men. But all one really needs to do to ensure that a Dora does something is to tell her that she can’t\won’t manage to do it.

I finished my course and promptly decided to move to Brighton and become a car mechanic, of course.

But that didn’t happen either as my baby had other plans. By the time I was twenty-three I was a single parent of a rather delightful baby, and I had decided to move again.

I have regretted leaving Ireland pretty much for most of the last twenty-five years, this is perhaps a silly thing to do. I frequently have epic dreams where I move back to Ireland. I went back there about five years ago, I hadn’t been for at least fifteen years, and I was shocked by how much it had changed. The Ireland of my youth and my dreams was gone, replaced by a lot of roads and houses. I was so in love with Ireland, I was in love with the funny little lanes with grass growing up the middles, I loved the strange decrepit houses with the earth floors, and I loved the funny old men who stood in fields and watched you rebuild stone walls you had knocked down. I loved the gypsies. I loved the almost continuous light rain that got you thoroughly soaked, without you really noticing, and I loved the luscious green that is to be found everywhere because of that wonderful rain.

I love all the things about a place that most people want to get rid of, people love progress, they seem to want everything to be flawless, no cracks in the walls, no mud floors, no smoky peat fires. What is so great about running water anyway?

I lived in a field in Ireland in Donegal, my nearest neighbour was an old man called Barney. Barney lived in a one room bungalow with a dirt floor and a smoky old range upon which he cooked his bacon and cabbages. Barney was toothless (no toothlessness allowed in the pristine world anymore) and he laughed and smiled all the time. His home could have been described as a hovel, and probably has been knocked down by now and replaced with a load of horrible concrete. The thing about old cottages with dirt floors is that when they fall down, they go back into the earth without too much bother, just like human beings.

All right I really like running water, but I also like simple life, and I like life in general and I think if we all lived more simply, life would be better all round.

I think I must have left a part of my heart in the Ireland of twenty-five years ago, I am lost somewhere on a long winding lane with grass growing up the centre of it, the swifts flying back and forth around me over the hedgerows, and I can smell the salty sea in the distance. There is no time on that lane, I walk it endlessly, content and happy, full of sunshine even though it was probably raining (it is Ireland after all).  It is the most vividly happy memory and it makes me terribly sad. All I want is to live in a wild lane, but that is not my life.

One thought on “A Story for Our Time; Ireland”