We didn’t mean to go to sea and sometimes on this seemingly endless journey things just refuse to change. The sea is still a flat never-ending plain stretching out into the infinite darkness of the night. I have tried sleeping it off but it’s just not happening. When I close my eyes the dark dances in front of them, colours rise and fall and no visions will come, the impossibility of sleep is forcing me to be present with each moment because if I am not one hundred per cent here in my body, my mind runs with every ridiculous thought I have, and my thoughts often really are absurd, as if they were lost at sea for months on end.

I remember a time when I slept outside beneath the stars, or rather didn’t sleep. It is an entirely different thing sleeping in the open air, to sleeping in a house or even a tent, somehow having a layer of something even fabric, between you and the rest of the world, creates some kind of security I suppose. It was a strange night, the sky was clear but the stars were out. I was camping in a woodland, I lay tucked up in my bivvy bag, comfortable and snug. For the first half hour or so I listened to the sounds of the woods, the creaking of the trees as they swayed gently in the breeze, the hooting of owls, and the occasional pigeon noisily changing tree, they are a funny kind of bird, their wings beat with such a loud almost whizzing sound, and they crash about clumsily in the topmost branches, as if it was all new to them and they were trying not to fall out.

I felt comfortable and happy so I turned over to go to sleep, but sleep would not come. Dreamland was entirely elusive that night, it refused flatly to let me in at all. Instead I lay still and was content to watch the small clouds drifting across the sky and the tree tops swaying from side to side. The trees in the woodland were young but very tall, as trees are when they are closely planted and they race to reach the light. My camp was in a small clearing and even though the moon was only in the first quarter it lit the woods enough to see all that surrounded me.

What amazed me after several hours of lying in the dark was that I realised I could actually hear the chomping of insects! I was momentarily harassed by a mosquito, but the minute crunching was a quite different sound that I had not heard before, coming from just behind my head. I imagined small civilizations of irate insects interrupted by my camp, or perhaps the odd nonchalant beetle out on its nightly hunt. 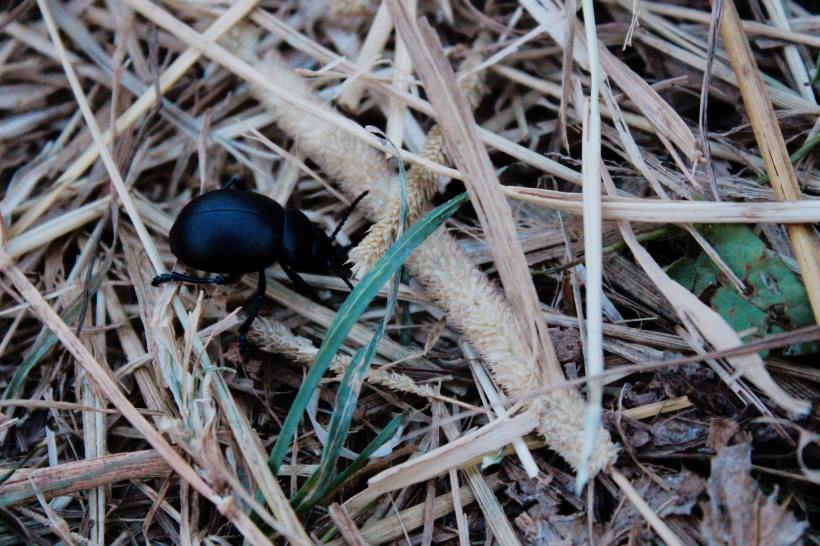 I did not allow myself to think too much that night, instead I watched the magical nighttime scene, or when my eyelids became too heavy I listened to the night. In the morning I was tired of course, but somehow the rest amongst the trees gave me enough energy for the day. The memory of wildness that I feel is so lacking in my ‘normal’ life; whatever that is, was well worth the sleepless night.

I have slept out under the stars very few times really. Another time I remember well was after a long hitchhike into Somerset on the way to a festival, the last car picked my friend and me up at about eleven thirty at night, after almost running us over on a dark country lane.  We had been jumping dramatically into the ditch to avoid cars for a few miles, then climbing back out and laughing until our sides hurt and were just wondering what to do next when our guardian angel pulled up and drove us about ten miles to a town.  He dropped us off next to a traveller site and suggested that we slept there.

We walked on to the site to find about twenty vehicles and caravans up one side of a dirt track, and also an open fire with about fifteen men sat around drinking and cooking chips. They made room for us, cooked us some chips and we sang a few songs. Then we curled up as near to the fire as we could, as we only had one really thin blanket, and went straight off to sleep. We must have walked many miles that day so sleep came quickly, and it was one of those sleeps where it feels as if you have just shut your eyes and suddenly the bright sun is there to wake you up!

Somehow I can’t stop thinking about the one really thin blanket. It was softly woven and light blue patterned and I loved it. I don’t know what happened to it or how I lost it, I suppose I left it somewhere, but I do remember how sad I was when I discovered it was gone. I had a lot of adventures with that very ineffective blanket, I wonder why I didn’t have a warmer one. I once slept under that blanket beneath a bridge in the Highlands of Scotland near the castle on Eilean Donan which was featured in the film Highlander. I was freezing cold, but I remember the blanket just as well as the castle, and the cold. I wonder if I would have remembered it as well had I been curled up in a lovely warm sleeping bag.

Oh the places I have slept! Is there a Doctor Seuss book by that name? Perhaps there ought to be. I slept in a service station corridor near Glasgow under that self-same blanket. I once slept next to the speakers at a rave that were pumping out music that was so loud that sleep should have been impossible, but it was the warmest place and I had been awake dancing for at least twenty four hours. I slept in a dried-up river bed near some crazy witches. I slept out under the stars beside a fire in the grounds of Castle Freke in County Cork in Ireland with the thin wee blue blanket. On midsummer’s eve I once slept on the top of a gorge and in the night I awoke because my bedding was on fire! I put the fire out and fell straight back to sleep. All right, that is a slight exaggeration as the fire was really just a smoulder because that time the blanket was made of wool, which doesn’t burst into flames.

So why can’t I sleep now? Perhaps I am just not tired enough. There is a limit to how much exercise I can have out here. I can only run around the boat so many times without getting dizzy, and I still haven’t found the courage to leap off the boat and go for a swim. I wonder what might happen if I tried deliberately staying up all night, perhaps then I would fall asleep. I remember a time when there was a meteor shower, one night in late summer.  I had promised my daughter, who was about four, that she could stay up and watch it, but it didn’t start until midnight. Ordinarily it was a fight to persuade her to go to sleep, she would try every trick in the book to stay awake for as long as possible. This night with permission to stay up until midnight she somehow just couldn’t do it. It was very funny and cute too, we made a bed outside under the stars and lay together waiting for midnight to come, at around eleven thirty she started to fall asleep, and I kept waking her back up, but try as she might she just couldn’t keep her eyes open. In the end I watched a few shooting stars and then I fell asleep too. No meteor shower for me that night!

Maybe that is what I need! The promise of a meteor shower, or some other astronomical spectacle, then I am sure to fall asleep, I would be happy to exchange the feeling of missing out on something truly magical for insomnia! Or would I?

Perhaps the best thing to do is to treat insomnia as an opportunity to get a bit more out of life. I am not wasting time sleeping, no I am squeezing a bit more living out of my time on this lovely blue planet. There is no way of knowing how long we have got here, there could be no tomorrow, and there will be no tomorrow if I don’t go to sleep, today would be forever. Yes I know that is silly, but I didn’t promise to make sense, especially as I could do with a really good sleep.

The most exciting thing that could happen to me now is a yawn!

Beetle photo by Fleur on Unsplash

One thought on “A Story for Our Time: Wild Sleeping!”