I am a land lubber, I do rather strangely have sea legs. I have no idea why,

I am a land lubber, I do rather strangely have sea legs. I have no idea why, or perhaps I do. I love the sea, and by that I mean that I love to be beside the sea, to walk beside her and breathe the fresh sea air. I love collecting pretty rocks and little pieces of driftwood to adorn my home. Above all of this I love to swim in the sea.

As a child I spent hours in the sea until I turned blue and my grandmother or mother would come and pull me out and wrap me in towels and feed me sandy sandwiches. I can remember this so well, we would visit my grandmother and grandfather on the Island they lived on; we would walk down to the sea and go crabbing from the rickety old jetty. Or spend the day on the beach making sandcastles, collecting shells and smelly old bits of dead crabs and cuttlefish. I found a fossilised anemone on that beach one day. I still have it somewhere.

I would race my brother and sister into the sea and always win.

Dreamily I would play in the sea. I was a mermaid, a dolphin, a fish, a whale, a crab, or just a bit of seaweed. I was the sea, and I loved her cold embrace, her salty taste, the way she stung me when I had a graze, the way she tumbled me over and over in her waves. I loved her movement, her power and her grace.

I loved to dive deep down and look at the bottom, to catch a glimpse of little and large fishes, to see the way the water moved the sand and rocks on the bottom. 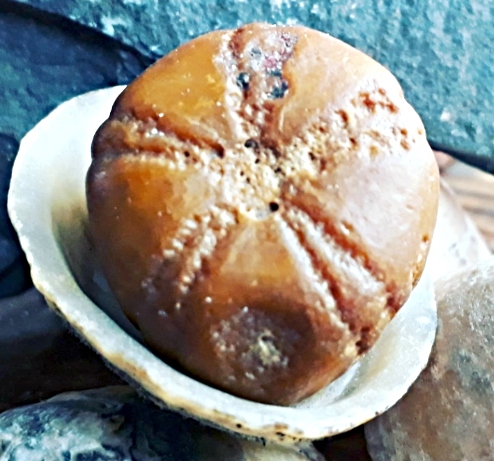 I would swim out as far as I dared and float, and my imagination would fill the sea around me with sea-monsters and sharks. I would stay until something touched my leg, I felt the terror and then I would swim back to shore in a panic as fast as I could, heart pumping, looking behind me, I would run up the beach and stand laughing with relief on the sand, looking back out to sea at the imagined monsters.

At the end of the day while I stood on the shore the sea would retreat slowly down the beach, she was in no hurry.  The sun would set into her; I could hear the hiss as the huge orange fiery ball slid sizzling into the sea.

Perhaps it was my love for the sea that gave me my sea legs. In my thirties I was fortunate enough to travel to Australia with my two daughters, and everywhere we went on or near the sea we would see whales. We saw whales in places where nobody had seen them before. I felt as if the sea herself was calling to me.

We went out on a whale watching expedition, which was where I discovered my sea legs. We sailed out to sea for two hours; the sea became increasingly rough the further from land that we got. The boat was small, and it went up, up, up and came crashing back down, down, down, over and over again. My daughters and I thought this was wonderful, they were ten and six at the time and ran delightedly round and round the outside of the boat, while I chased them shouting “hold the handrail tight” louder and louder over the crashing of the boat in the huge waves. By some small miracle my girls stayed on the boat.

All the other passengers got seasick. All of them. Courtesy bags were handed out. Still the sea tossed us up and down and the crew slowed the boat when the whales were sighted. We were blessed by an adolescent whale which leapt clean out of the water, an event which the captain of the boat told me happens just once a season, if you are lucky. I felt like the luckiest woman alive. I felt like it was just for me.

I don’t take many photographs; I never have really. Sometimes I regret it, when I forget things that I would like to remember, but I still see that whale in glorious technicolour leaping from the water in my mind’s eye. And I still see my naughty children running around the boat, while I prayed that they stayed on board.

I was lonely in Australia, it was so big. Travelling alone with children on a shoestring is very different to going alone or with friends. I spent a lot of time staring out to sea while my children played (spotting more whales in the distance). One day I sat on a lonely beach and I got my fiddle out to play a tune, and the wind started to play it before I had the chance. It was as though the sea herself had decided to send out her tendrils to learn to play, as if she had been longing for the chance to play. It was the most beautiful music that I ever heard. We were enchanted.

Loneliness has been a theme throughout my life. Dreaminess and loneliness. I have learned to love the dreaminess, it comes with a great amount of creativity, music and word smithery, which I wouldn’t change for anything. I frustrate those around me because I am often dreamy to the point of taking rather longer than most people are comfortable with to answer questions. Questions no matter how small require consideration, and answers, there are no simple answers, even yes and no are often hard for me to grasp, or perhaps to formulate. Would I like a cup of tea? Can be a yes, or a no, what sort of tea? Well I don’t know, let me imagine the flavours for a while, what mood am I in? Am I seeking comfort, or would I like a refreshing kick from my tea? Do I even want tea?

Dreaminess is a blessing that I used to curse, but these days I am daily thankful for it. Wherever I am, I can be anywhere in the world. I played a game as a child, through my teens and long into adulthood, I still play it now when in the right mood. I imagine my room is just a room. A room on its own, it feels a bit like when Dorothy is in the hurricane in the Wizard of Oz, spinning around in the house. To begin with there is nothing outside the room, the rest of the house is gone, I am in the room, and the sky is outside the room, if I were to open the door, the sky would be right there, if I stepped out I would fall down through the empty sky. Then my room would land somewhere, anywhere in the World, and I would imagine it, that place, the Outback in Australia for example, right there just outside my room! Huge red kangaroos jumping, long nose potoroos scampering (or whatever it is that they do) to and fro. And lots and lots of red dusty earth.

Once when we were camping in the outback, we went to the local swimming pool, in a place called Winton. Winton, the home of Waltzing Matilda! Or so it said on the sign. While we were swimming in this huge swimming pool with no lifeguard (swimming in Australian outback swimming pools is way more fun than in pools back home). Think two-year-old children able to swim unattended because it is so damn hot that it is a necessity to swim daily, anyway I digress (again).

Where were we? Oh yes, Winton, ah yes while we were swimming a dust storm began, and we all got out of the pool while clouds of deep red dust swirled around us and thickened the air. We went in doors and sat down in the hot showers and waited with the locals for it to pass. The water in the showers was from the ground, it emerges at a whopping 83-86°C! It smelt of sulphur and was almost too hot to bear! When we came back out of the showers all the world was coated with red dust. We returned to our tent and to my dismay we had left the door open and everything inside was covered in red dust. Hence the red earth in Australia, outside my room in the game.

No need to say then that this game will be a favourite of mine while we are at sea.

Not so the loneliness. I have not learned to love the loneliness. When it comes it gnaws at my heart. I love solitude, but solitude is a choice, loneliness is not. I can be lonely in a room filled with people, I am often lonely at parties, or rather I would be if I actually went to them. I recently gave myself permission to hate parties and not go to them anymore.

I am however not alone on this trip, with me at sea are three of my lovely, lively daughters. I have one more daughter who is at sea elsewhere and we shall miss her terribly. My daughters who are with me are 6, 8 and 18. So far we are happy to be together, apprehensive about what this voyage may bring, excited for all the projects we normally have no time for, and overtired from the stress of being lost at sea.

3 thoughts on “A Story For Our Time”