I don’t remember the first time I saw a violin, but as a child I saw the violin as a mystical being, a will o the wisp, and of all musical instruments, it had a strange allure for me, but I don’t remember if I ever actually asked for one, somehow I had picked up the idea that to be any good one had to start playing at age three, and be a child prodigy, and as I had missed that boat on both counts it would never be.

Later on in my teens I discovered fiddle players and my interest was again piqued, I knew that I was not a musical genius, and when at age nineteen I attended a traditional Irish music course in Donegal I met some sweet and gnarly old Irish men who not only played the fiddle, but scoffed at the idea that it was too difficult for me or anybody else for that matter, and so I went and bought a cheap Chinese violin and got sent upstairs (away from the real musicians) to learn to play it. 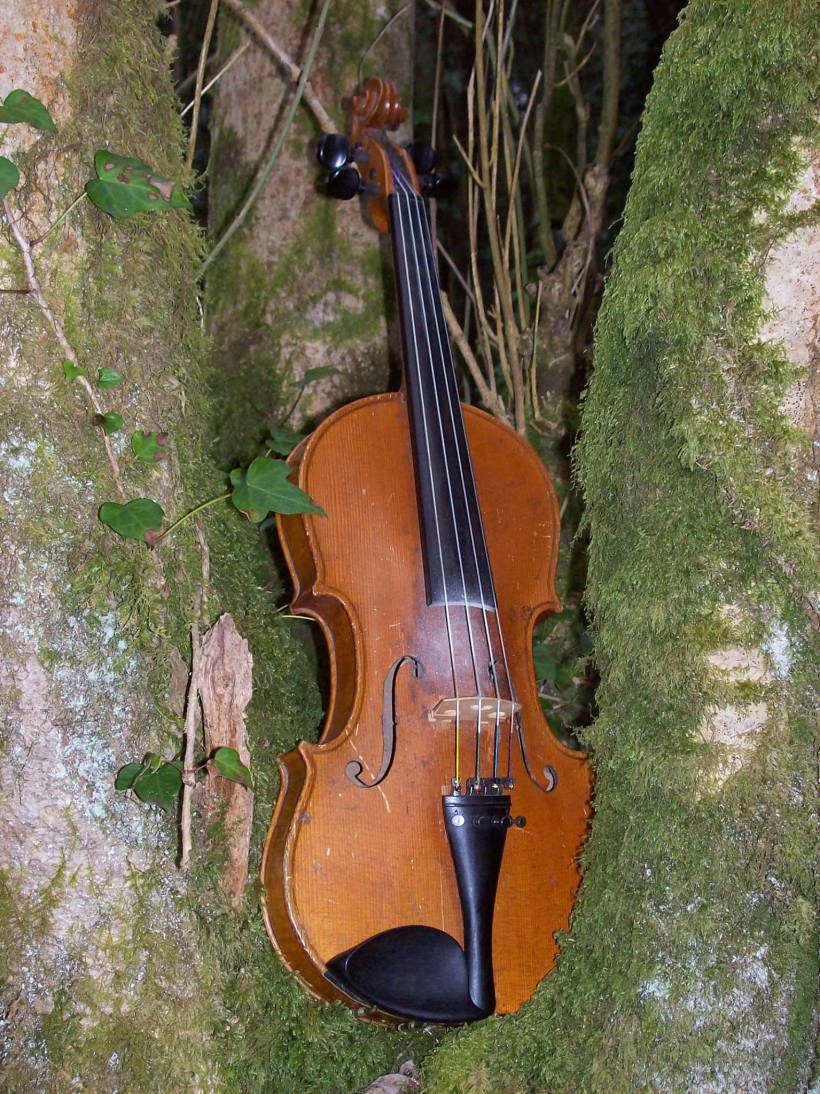 At first I could hardly believe that I had been given permission to play a violin! I soon realized it was going to take a while to get good enough to play it within earshot of anyone else, but the course was the most encouraging and inclusive musical environment I have ever been in (to this day).

I was living in my van, in a field in Ballybofey that belonged to an intriguing man who ran the music course in his hostel, with a group of other young musicians. That sounds like we all lived in the van, but actually it was a tiny van! We all lived in the field, which was quite large and boggy in places, anyway I digress…. For several days a week we would get up in the morning and spend the entire day playing music at the hostel with the local traditional musicians.

Ireland loves it’s traditional folk music and values it’s musicians, the course was funded and endorsed by the government and really, at its essence, was a statement of pride and love for the music of that beautiful green Isle.

At the end of most weeks there was a concert in the hostel and half the town would come up to listen, I often felt completely out of my depth, but nobody else seemed to notice or to care! I mostly played penny whistles and sang at those evenings, and every week without fail Eddie the owner of the hostel would announce, without asking me, that I would sing ‘The Black Shawl’, and he would go all misty eyed and far away while I sang it, which aged nineteen or whatever I was I really did not appreciate.  Needless to say I didn’t sing that song again for twenty years, until I returned to Ireland and was asked to sing it by a friend who also did the course. I love that song now!

I left the course a scratchy fiddle player with a repertoire of about fifteen Irish tunes and the excitement of potentially becoming bearable to listen to. Four children (who seriously hamper my practicing) and twenty years later I like to believe that my fiddle playing is quite enjoyable to listen to.

I now have the very great pleasure of owning two fiddles. The second fiddle I bought twenty years ago in a shop in the Lake District that belonged to a man who had played the violin in the Royal Philharmonic orchestra, his shop was full of children exploring the instruments and making a terrible racket but enjoying themselves. I was encouraged to try out the violins until I found one I liked. When I found the one I wanted he asked how much money I had, which I believe was not a great deal and to my amazement he said it would do, and that I had the hands of a violinist (perhaps!). Maybe I am romanticising the memory but I believe he really loved people playing music and could see my enthusiasm.

I fell in love with that fiddle in a big way, it is over a hundred years old and is a copy of a Stradavarius (of which I believe there are quite a few).

It has a loud and bright tone and the back is very pretty. It has clearly been used to play a tune which I have never encountered but perhaps now will investigate, something to do with a four poster bed and in between verses you bash the four corners of the fiddle (top and bottom) with the end of the bow leaving quite distinctive marks. Who would do that nowadays to a one hundred year old violin? Not me!

When I hold this fiddle in my hands I wonder about her, who made her? To whom has she belonged? Was she loved? Has she travelled the world? How did she come to be in that music shop? Apparently she was made in Eastern Europe, but that is sadly all I know for certain.

What is the spirit of an instrument? Indeed does it have a spirit? I loved that fiddle dearly, and I used to kiss her and wonder who else had kissed her? How many hands have held this beautiful creation? If you have not kissed a musical instrument then I must say don’t knock it until you try it, and it is probably high time that you did. It is not all that different to kissing a baby, it is very smooth and smells delightful.

This fiddle has a distinctly male feel, it has a rich deep tone and character. My other fiddle was gravely insulted when I started playing a different fiddle, I still love her with a sentimentality that does not allow me to be parted from her, but I now prefer to play my grandfathers’ fiddle. I feel my connection to my grandfather when I hold his fiddle, and of course when I kiss it! 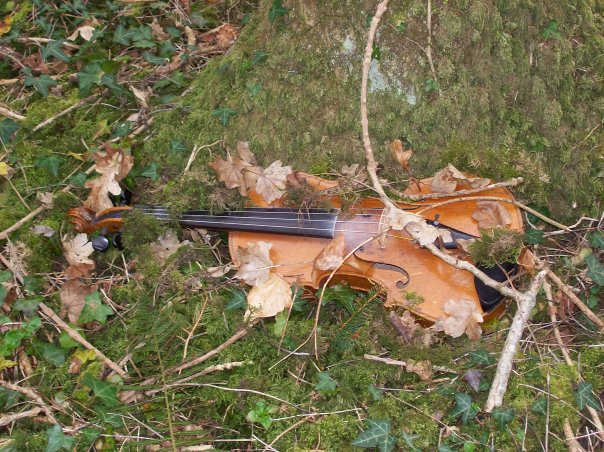 I have just arranged to have some more lessons, in twenty-three years I have had three lessons so far, which could be partly why I am not a virtuoso, I can blame my other musical passions; the words jack of all trades and master of none have always slightly irritated me, because I am not content to love just one instrument, I have many interests and curiosities in life and have no desire to focus all my attention in one place.

I also have the extraordinary good fortune to own a beautiful guitar that was made especially for me! A brand new instrument born into the world, what a contrast to one that was passed through so many hands! The twist is that although the guitar is brand new, the fret board and the bridge of my stunning guitar are made from eight thousand year old (that’s right 8000 year old) bog oak. My partner spotted an ancient tree trunk near a building site, it had been dug out of a peat bog to lay foundations for some houses (who builds on a bog? Not that I am complaining exactly, more just incredulous), so late one night after a few cups of tea we walked down there with a trolley and a couple of friends and set about dragging said tree trunk home. Bog oak is a very special thing, a tree that grew eight thousand years ago, and the part of the tree that is preserved by the bog is the heartwood, it is almost black in colour because of the tanic acid present in the oak and the peat, it is extremely dense and weighs a ton! It took a few hours to drag that tree home, less than a couple of miles!

I would love to hear the stories my fret-board could tell! During it’s life as a tree it must have lived for many hundreds of years perhaps even thousands before it was encased in peat and pickled by the bog. I get a real sense of the ancient and the mystery of life when I hold my guitar. 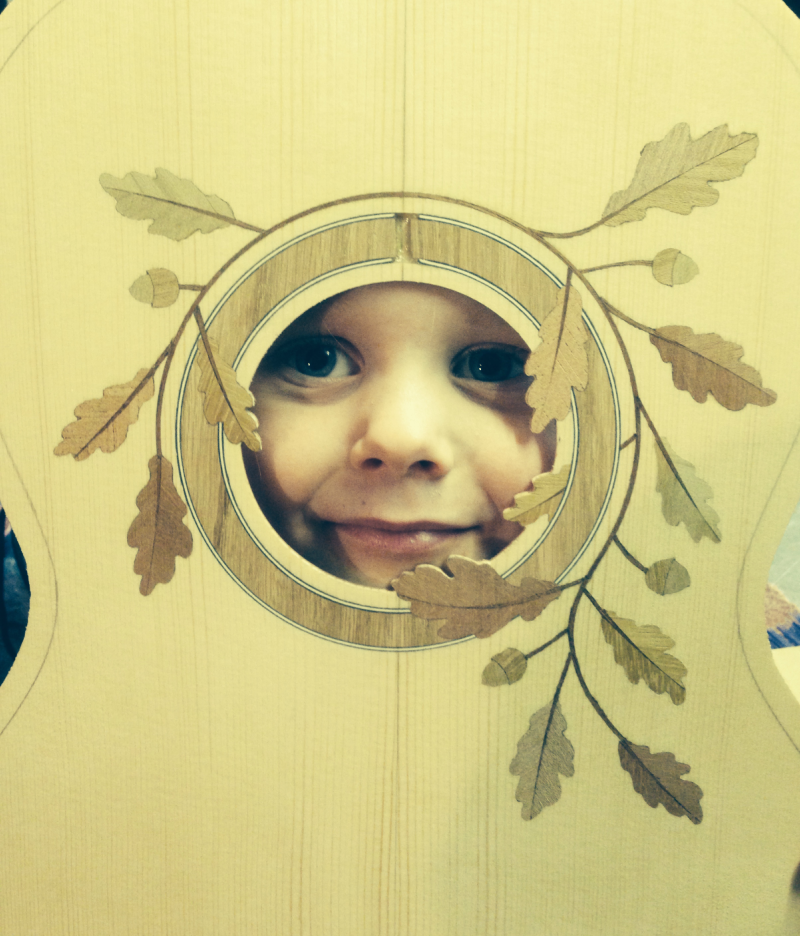 I don’t recall if I have kissed my guitar yet, we are fairly newly acquainted, it was my *!*th birthday gift from my lovely friends and family. I am sure there will be a great deal of kissing at some point in the future; it is such a beautiful creation with an exquisite sound and was hand made in Somerset by the rather fantastic Nathan Ball.

I have never had a guitar lesson, and at some point I would definitely like some. When I found out I was getting this incredible guitar I decided that I must practice every day in order to be worthy of her, and so I did. I made a rule to get my guitar out every day even if it was only to strum one chord for a moment and I was astonished by the progress I made, “nobody made a greater mistake than he who did nothing because he could only do a little” so said Edmund Burke an eighteenth century statesman who is perhaps most well known for saying that, it’s amazing what a few minutes a day can do for ones musical skills, people often say to me that they’d like to learn an instrument and I often say ‘just a few minutes a day’ anyway you can lead a horse to water.

My current excuse not to practice enough is that my youngest child wakes up every time I sing a song.

So now I feel the urge to stop sitting in front of a glowing screen and go and hold my beautiful guitar or my silky fiddle, who knows perhaps I will give them a few kisses before I finish playing and you never know maybe the little one will sleep through a few bars!