I don’t know if I chose to be a folk musician, or if I was born that way. My earliest memories of music are of my mother singing – classical choral, pop and folk music. My mother has a beautiful voice, I remember being utterly enchanted by it; I would lie in bed (when I was supposed to be at school) listening to her singing downstairs.

My mothers’ record collection included Joan Baez, Carly Simon and Steeleye Span and a very old vinyl single of A. L. Lloyd called “Gamblers and Sporting Blades”. The first time I remember actually listening to Steeleye Span (rather than it just being on in the background) I felt something stir within me. I like to think that it was some sort of an ancestral awakening, a kind of folk memory. The album we had was Commoners Crown, and the songs I most loved were Galtee Farmer and Dogs and Ferrets, two traditional English folk songs. What I find most magical about these songs is not only the ancient feel of the music itself; but the insight it gives into such a different world to the one in which I grew up.

I had a sense very early on in my life that I was either not really from this planet, or perhaps just not from this time period. This music was the first clue for me, as a child, that there was a different world out there to the one being pushed on me by school and the media. Folk music was a lifeline to the past, magic and a deeper sense of who we are, where we have come from and what we still have the potential to be. I have always had a very deep sense of connection to the land, and in particular to this land, The British Isles.

Before the internet I had no idea where to go to find more folk music. This flummoxed me for many years, and of course it never occurred to me to ask my mum! Until one day I met a chap who was hitchhiking to Southern Ireland, I sang him a song and he told me that Ireland was full of this kind of music, so I hitch-hiked there with him, and so began my love affair with Traditional Irish Folk music.

In Ireland I picked up the penny whistle and the mandolin for a while, I was in my element, utterly infused in traditional music. It kept me going at a time in my life when all else was chaos, my relationship with my family had broken down and I was homeless and living utterly hand to mouth, but I didn’t care because I had found my music.

I mostly lived on traveller sites, and we spent our evenings playing music together, sharing tunes, songs and stories and our ancient ancestral love for the music of our spirits! 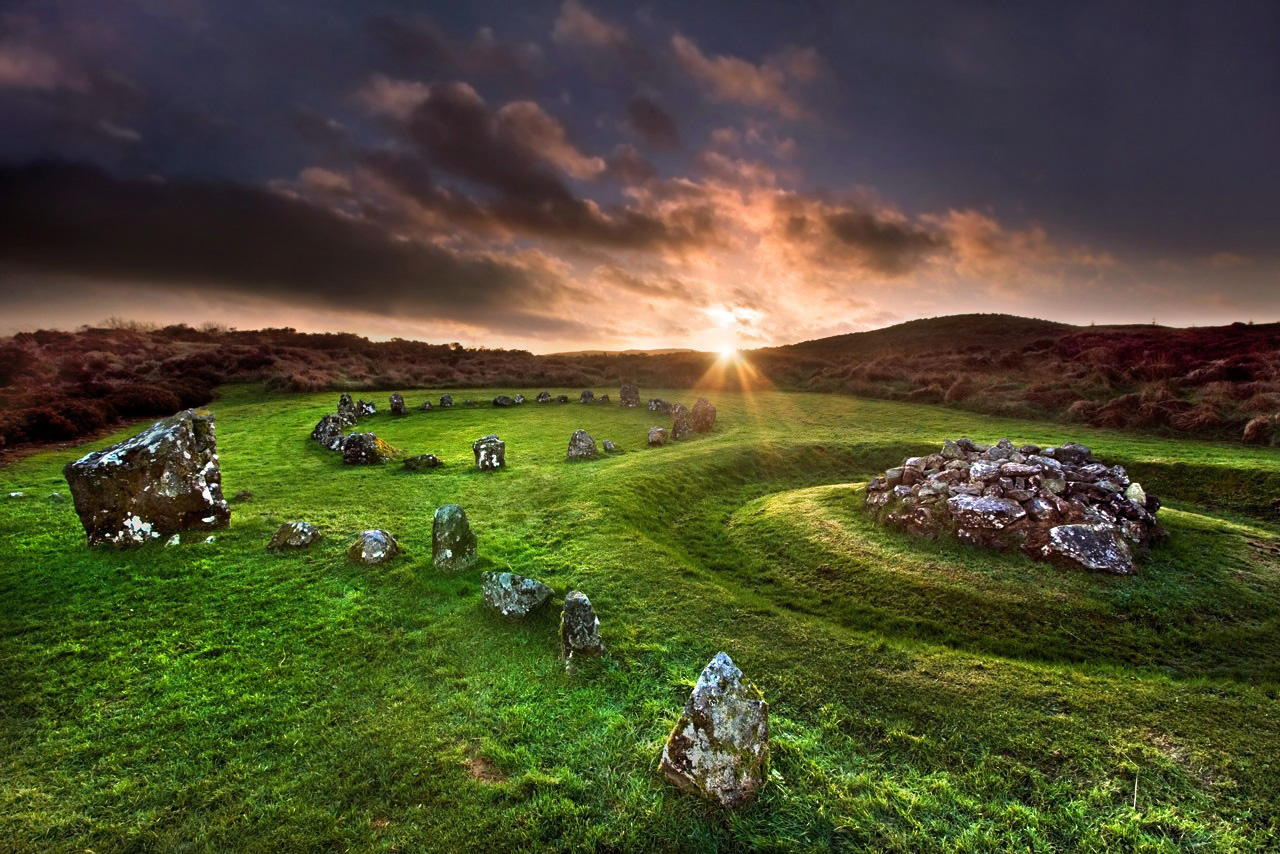 There are many definitions of “Folk Music”. The generally accepted view is that it is any music that originates amongst the common people of a region, usually from unknown composers, and is spread by transmission from person to person. The fact that it is passed from person to person really infuses the music with the spirit of the people, it’s a bit like Chinese whispers, the words and tunes would never have stayed the same for long. The standardization of folk music only came about when the Victorians realized that it could be lost forever (due to industrialization forcing rural people into cities). So, they set out to record as much of it as they could find. Collectors such as Cecil Sharp set forth into the English countryside and made friends with rural folk singers, writing down whatever songs he could persuade them to share. Many of the rural singers were suspicious of the collectors’ motives, or simply needed an introduction before they were willing to even talk to them.

Sadly the collectors chose to edit and change the music and words so that they conformed to the social norms of the day. Before this the songs often did not follow the same tune all the way through, nor did the verses have to be the same length or style. Lyrics were also ‘cleaned up’ to please the ears of all those starchy Victorians!

Perhaps that was the mark of industrialization on Folk music. The music was, prior to its collection, rather wild and free, following no particular pattern, no familiar set length or verse -chorus verse pattern, those rather urban Victorian collectors moulded it to their view of what it ‘should’ be’, removing any content that was considered corrupt, maybe they even domesticated it!

English folk music was wild and free, like the magical land from whence it came. I believe the music carries the spirit of the land, and this land has no symmetry, it has no regularity or orderliness. This is a land of mossy rocks, rolling hills, tumbling streams and rugged cliffs and in there lies its beauty. Many years ago I was struck by the magnificence of an ancient oak tree, and in that moment I fully recognized that true beauty has nothing to do with perfection or symmetry.

It seems strange to me now that I have spent so much time striving for perfection in my music, perfection being always hitting the ‘right’ note, the flawless performance. Just like the folk music that I so love, I come from this magical ancient land, the spirit of the land dances through its music, laughing in the face of perfection. The last thing I want to be is symmetrical, flawless and domesticated!

I have noticed a distinct difference in the spirit and character of the folk music of this part of the world, between the English, Irish, and Welsh folk music (I haven’t experienced enough Scottish music to comment on it). Briefly I will describe it thus:

I love Irish folk music, I love it’s robust and wild character, it is often fast and racing like a pack of wild dogs running across a windy moor. Some music, such as that by Turloch O’ Carolan, is slow, dreamy and romantic, with gentle lilting melody like a trickling brook.

Welsh folk music sounds sweet and open, like a field of barley, or a little pixie running gently through your hayloft.

English folk has a mysterious quality to it, like these magical lands, it is often gritty and dark, murderous and sad with a definite hidden mossy depth.

Many folk songs share certain topics, of which drinking, sex and farming are the most commonly found. In my twenties I had a penchant for the more sinister folk songs, I liked to sing about death and betrayal.

One of the functions of folk music in the past was to carry the news. Before literacy and printing was commonplace people would tell the news to each other in song. News stories were sung to more commonly found tunes and spread from person to person across the land. Many of these stories were printed on Broadsides, a common form of printed papers from the 16th to 19th century. Broadsides were printed on one side only with news, adverts, information, songs and sometimes a woodcut illustration; by 1660 400,000 were sold annually.

The writers of the folk songs that appeared on the broadsides would include a tune suggestion for people to sing the song to, this is why many songs have similar tunes. 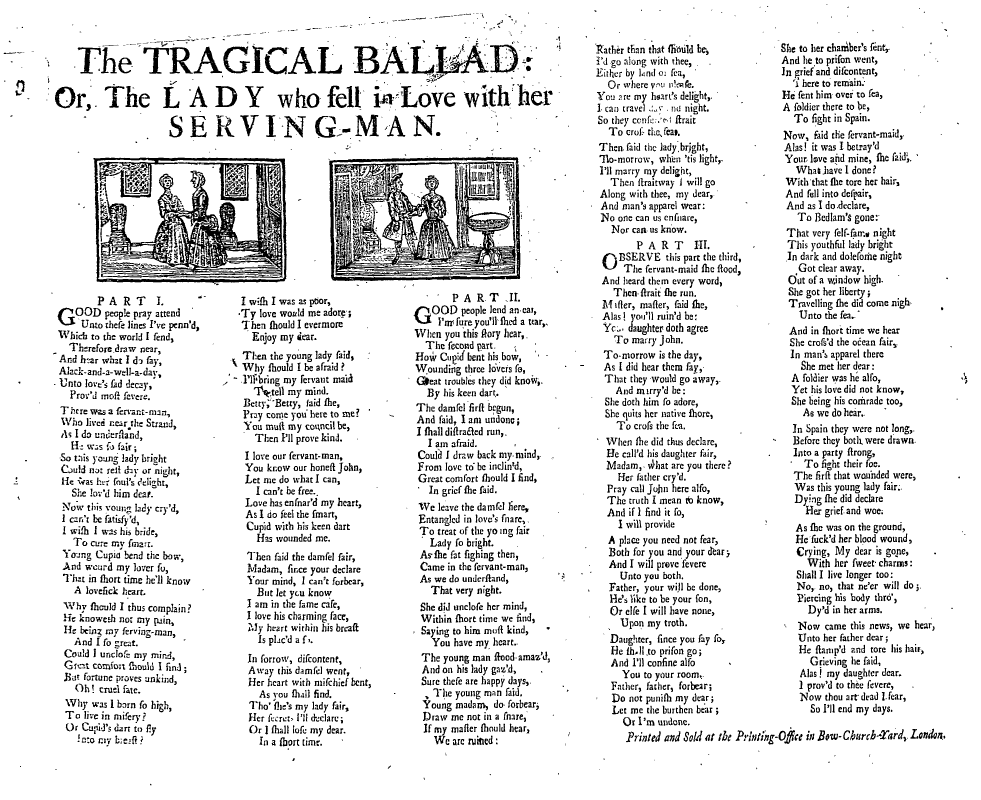 It is very hard to classify many songs as belonging to the English tradition or the Welsh, as so many of them travelled so far. One of my favourite songs ‘Lord Rendal’ was found all over Europe in many different forms and languages. The basic story remaining the same: a young man goes to his mother after his lover has poisoned him and he takes to his bed and dies. This song must have captured the imagination of so many people. When I sing it I am filled with the immense power and magical sense of a song sung for hundreds of years by many thousands of people, it gives me shivers to think of it.

At a Medieval event last summer I spent the evenings sat singing round the fire, which is one of my favourite places to sing. Some young men from Eastern Europe came to our fire and joined in with the music, even though we were not really able to talk fluently together we found that we had songs in common, ancient folk songs that have survived across Europe. It was a beautiful feeling to be singing a song together, with unrehearsed stunning harmonies, in different languages across the span of time……

What a magical thing music is!

Everywhere I go I am grateful for the bond that music brings, I am sitting in a café right now, the music playing in the background is that of a musician who I know personally and that makes me feel at home.

I would not say that I am a particularly shy person, if you get me on my own, but put me in a group of people and I lose the ability to make conversation. However, give me an instrument and I will play happily for hours with whoever else is ready and willing to play. It’s a different kind of communication. Talking is of course wonderful when the words are meaningful or loving, but music carries the spirit of the people who play it, the spirit of the land and the air, the loves, the lives and the dreams.